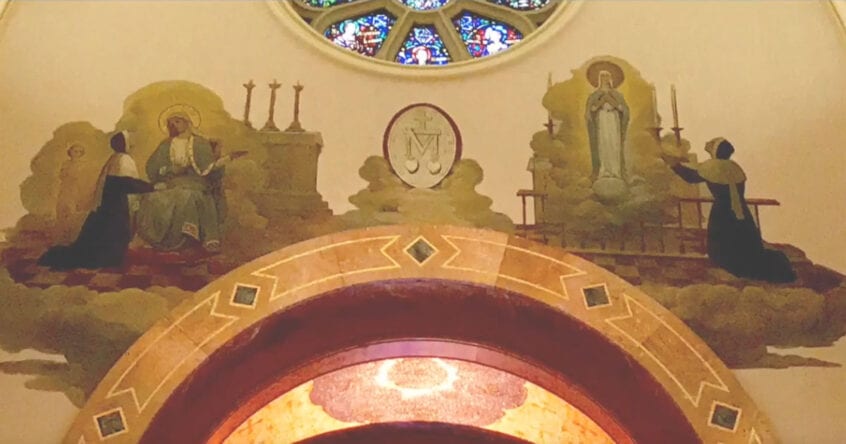 Script of this video, written by Mr. George Whelan:

Three Marian Apparitions on the Entrance to the Central Shrine
March 6, 2018

Greetings, Friends of Our Blessed Lady,

This week we turn our attention to some of the images on the archway to our Central Shrine of the Miraculous Medal, specifically, the triptych portraying the three apparitions of Our Lady to St. Catherine Labouré.

We have seen images of these apparitions before. The three are portrayed in plaster reliefs that hang on the eastern wall of the lower level in our Chapel. The first apparition, Our Lady of the Chair, took place on July 18th, 1830. A plaque describes this event as follows:

At Paris, on the night of July 18, 1830, Saint Catherine Labouré, a novice Sister of Charity, was awakened by her guardian angel in the form of a child. He led her to the chapel, where the Blessed Virgin appeared to her. Our Lady seated herself in the sanctuary and Catherine knelt at her feet, resting her hands on Mary’s knee. They talked together for two hours. Mary’s most important message was: “My child, the good God wishes to charge you with a mission.” (The making of the Miraculous Medal was the mission later entrusted to Catherine.)

The second apparition, Our Lady of the Globe, took place on November 27, 1830. A plaque summarizes this event:

On November 27, 1830, during the afternoon meditation, Saint Catherine saw Our Lady in the chapel sanctuary standing upon a globe. The Virgin held a golden ball which she seemed to offer to God, her eyes raised heavenward. Her hands were resplendent with rings set with precious stones that threw out brilliant rays of light. A voice spoke: “The ball which you see represents the whole world, especially France, and each person in particular. These rays symbolize the graces which I shed upon those who ask for them.”

The third apparition, Our Lady of the Miraculous Medal, took place on the same day, November 27, 1830. A plaque describes this event:

Actually a continuance of the second apparition. The golden ball vanished from Mary’s hands and she extended her arms, the rays from her jewelled [sic] fingers streaming upon the globe beneath. Letters of gold formed around her, which read: “O Mary conceived without sin, pray for us who have recourse to thee.” The voice spoke again to St. Catherine: “Have a Medal struck after this model. All who wear it will received great graces; they should wear it around the neck. Graces will abound for persons who wear it with confidence.” the making of the Medal was the mission entrusted to Catherine.

All three apparitions are portrayed in the archway of the entrance to the Central Shrine.

The first apparition appears to the left of the viewer; it portrays St. Catherine kneeling before our Blessed Lady with her guardian angel standing in the background. Our Lady, seated in a chair, is gesturing towards the altar. She encouraged Catherine in all her needs to “come to the altar.” Besides Mary’s promise that God had a special mission in mind for Catherine, Mary also affirmed her closeness to the Double Family of St. Vincent de Paul: the Congregation of the Mission and the Daughters of Charity. Mary also mentioned that after her Sisters returned to their primitive spirit a large group of Sisters from the new world would join the Daughters of Charity. That group was the Emmitsburg Sisters of Charity, one of the six communities that look to St. Elizabeth Ann Seton as their Foundress. In 1849, some twenty years after Mary had spoken with Catherine, the Emmitsburg group merged with the Sisters in Paris.

The second apparition appears to the right of the viewer. Mary, standing on a large globe and holding a gold ball in her hands, reveals herself as a Mother concerned for the plight of the suffering in the world in general and France in particular, and every individual who suffers. Golden letters appeared in an oval around Mary’s head and spelled out the prayer: O Mary conceived without sin, pray for us who have recourse to you. Twelve stars appeared around Mary’s head. She then commissioned Catherine to have a medal struck in this image. The image appears on the front face of the Miraculous Medal today. It portrays Our Lady of Grace with arms extended in blessing and graces radiating from rings on her fingers; the image also includes the Miraculous Medal prayer and twelve stars surrounding Mary’s head.

The third apparition is represented by the image on the reverse side of the Miraculous Medal. It portrays the rich symbolism we have seen several times: Mary appears as co-mediatrix with her Son in His death and resurrection and the salvation of humankind. Her pierced heart alongside that of Christ’s Sacred Heart portrays her solidarity with her Son as does the large “M” entwined with his Cross. The twelve stars around the edge of the medal identify Mary with the Judeo-Christian tradition of the 12 tribes of Israel and the 12 Apostles, pillars of the Church, the new Israel.

Our prayer this week is taken from the Miraculous Medal Perpetual Novena:

O Lord Jesus Christ,
who for the accomplishment of Your greatest works,
have chosen the weak things of the world,
that no flesh may glory in your sight;
and who for a better and more widely diffused belief
in the Immaculate Conception of Your Mother,
have wished that the Miraculous Medal
be manifested to Saint Catherine Labouré,
grant, we beseech You that filled with like humility,
we may glorify this mystery by word and work.

Next week we will reflect upon the two images of St. Joseph on the entrance to our Central Shrine.

Thank you, dear friends, for your patronage and especially for your devotion to Mary. May you always remain close to Our Blessed Lady.

O Mary, conceived without sin, pray for us who have recourse to you.