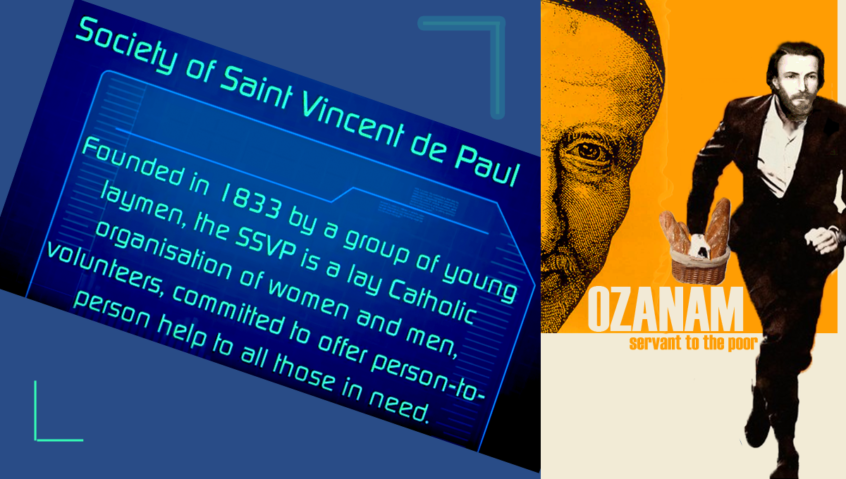 Joseph I. Dirvin, C.M., in “Frédéric Ozanam: A Life In Letters”, characterized Frederic Ozanam as

“an apologist … fiercely loyal to the Church he defended vigorously with speech and pen, and with his unique Society dedicated to the souls and bodies of the poor.”

May the members of the Society of St. Vincent de Paul be filled with zeal in carrying out God’s mandate to care for His people in need! Frederic Ozanam’s clear-sightedness, nourished by faith, was equalled only by his courage. His contemporaries did not expect to find such courage in a man whose health was fragile and who was professionally secure. It was courageous, on his part, in a Church which was then very clerical, to consider that he had a specific mission as a lay person. This courage led him to denounce the sloth of a clergy that the 1801 Concordat had tended to render less sensitive to the misfortunes of others in this world. He did not hesitate to challenge the clergy through the person of his elder brother, Father Alphonse: “You are not carrying out your true mission. If a larger number of Christians and especially clergymen had looked after the workers in the last ten years we would be more certain of the future”; and again: “The priests must give up their little bourgeois parishes: their flocks are an elite in the midst of a vast population that they do not know…”

These courageous stands, intensified by Frederic’s political option for Christian Social Democracy, made many enemies for him both among the conservative Catholics and among those who adhered to a Socialism considered remote from the church. This did not prevent him from being seen as a guide, a pioneer and even as a prophet by many people of his generation. In his youth, he already acknowledged this, with his customary humility, in a letter to Ernest Falconnet (1834): “In some respects I am surrounded by seductive temptations of all sorts. I am in demand, people argue over me, I am pushed to the forefront… because God and my education have endowed me with some tact, a degree of broad-mindedness and tolerance in my outlook. They want to make me into a sort of leader of Catholic youth in this country. A fair number of worthy young people hold me in an esteem of which I feel unworthy. However, can this combination of outer circumstances possibly be a sign of the will of God?” How often do we find in the one person the head of family, founder of fresh charity, friend of many, the intellectual, the exceptional scholar, popular teacher, astute diplomat in the service of Church and society-and all of these simultaneously and most fruitfully in the short space of forty years?

To find the like we must turn to his spiritual father, Vincent de Paul, who lived
a dozen lifetimes in one and changed the whole course and practice of charity in
the Church. It was no accident that Ozanam chose Vincent de Paul as the patron
of his Society, and how providentially and enthusiastically Vincent answered
the call!

– from Joseph I. Dirvin, C.M., in “Frédéric Ozanam: A Life In Letters”