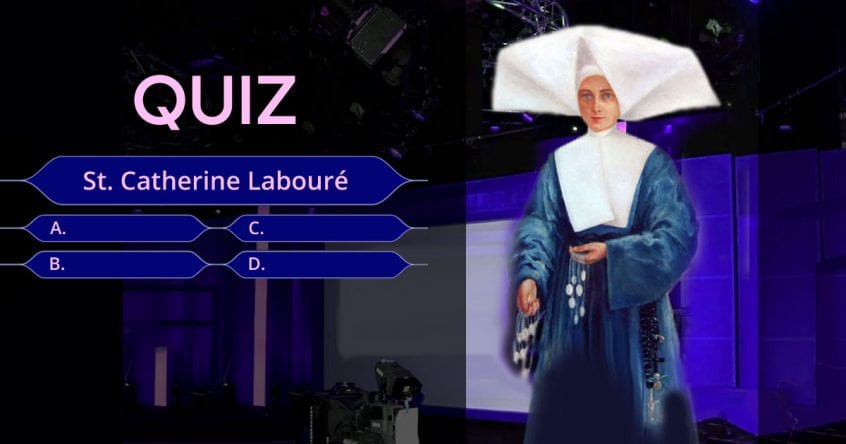 Who Wants To Be a Vincentian? St. Catherine Labouré, D.C.

Start Quiz
Catherine was baptized on the day of her birth, and was given the baptismal name of a local saint. She was often referred to by this name. Who was this saint?
Catherine chose the Daughters of Charity after what experience?
What did Catherine spend most of her life doing in Reuilly near Paris?
In her second apparition to Catherine on November 27, 1830, she saw Mary standing on what?
Catherine’s mother, Madeleine, had a total of how many children?
What wording on the Miraculous Medal that Catherine urged her spiritual advisor to have struck would be influential in Pope Pius IX’s later proclamation of the dogma of the Immaculate Conception?
On the back of the Miraculous Medal appears what capital letter?
Who was a contemporary saint of St. Vincent de Paul, and came from a village very near where Catherine was born and raised?
Bonus Question
/
Check Answers
Your Result:
Review Answers
Sorry, no results found.
Please repeat the quiz and try different answer combinations.
Thanks for taking the quiz! For more media resources about the Miraculous Medal, click here.
Recommended for you:
Door of Faith: St. Francis Regis Clet
Share your results
Share your results
Share your results
Retake Quiz