BRANCH OF THE VINCENTIAN FAMILY INVOLVED IN THE PROJECT: Ladies of Charity of Dallas and AIC Trujillo, Honduras 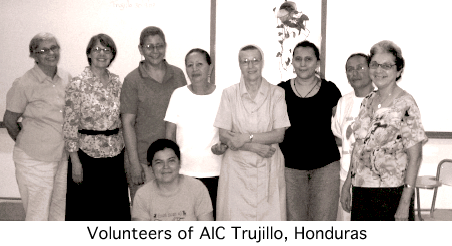 LENGTH OF TIME THE PROJECT/PROGRAM HAS BEEN IN EXISTENCE: 2 years

This project developed from the Twinning relationship between Ladies of Charity of Dallas and the newly formed AIC Trujillo. The Project provides a full 3 year scholarship for 15 students to attend and complete requirements for an education which will result in a certificate or credential in various fields such as teaching or administrative work. Students are supported during the duration and accountable for performance in the chosen field. The AIC Trujillo Group sought to address systemic change.

This project was identified by the AIC Trujillo as meeting a need in the Trujillo community to provide a source of dedicated professional workers which will serve the needs of the Community. A secondary goal would be to provide a much needed avenue for training which would lead to future employment in country which would begin to address the vital issue of migration from the community to seek employment. All project goals and objectives were developed by AIC Trujillo working closely with the Hijas de la Caridad in Trujillo. Ongoing progress of the project has been overseen by the AIC Trujillo Group and each year a Member of LOC Dallas and AIC Trujillo meet in Trujillo to share the results and the progress of the Project.

This project is in the second year of the first 3 year scholarship. It is producing new leaders and many other projects that are assisting to poor in that area.