BRANCH OF THE VINCENTIAN FAMILY INVOLVED IN THE PROJECT: Daughters of Charity and the Ladies of Charity 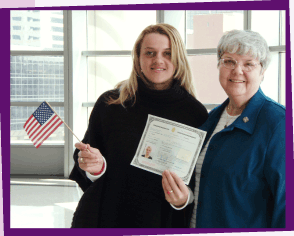 LENGTH OF TIME THE PROJECT /PROGRAM HAS BEEN IN EXISTENCE: 15 years

Since the influx of thousands of Bosnian refugees fleeing war during the 1990’s St. Louis, MO has become an active center of refugee resettlement and home to many immigrant families. Many of those refugees are women. Some come with their husbands, some are widows – nearly all of them have children and most are poor.

The Immigrant & Refugee Women’s Project teaches refugee women the English language – and much more. Most of the women entering the program had little or no formal education in their home countries. In a new country with no language skills and, often, coming from cultures where women have limited exposure to the world, these women find themselves very isolated.

Most of these women are unable to attend formal English language classes because they have small children, lack transportation or have experienced physical or emotional trauma. Teachers are volunteers who work with the women in their own homes. The women are taught English to help them assimilate and navigate schools, doctors and shopping. Beyond that, though, they learn about resources for abused women, how to get a job and manage their finances as well as how to become a citizen.

Their connection to the volunteer teacher relieves the isolation of living in a new country, builds their self-confidence and enables them to effectively advocate for themselves and their children.

Since 1995, Immigrant & Refugee Women’s Program (IRWP) has helped women arriving in St. Louis, MO, from foreign countries to make a new life in the United States. Founded by Sr. Elise Silvestri, SSND, IRWP began with six Vietnamese women students. After adding several volunteers and reaching out to other cultures, IRWP became a sponsored ministry of the Notre Dame Ministry Corporation. In 2006, IRWP received its own 501(c)3 status. A local association president of the Ladies of Charity is on the board along with a Daughter of Charity.