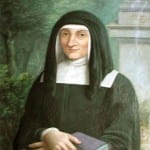 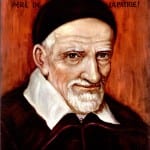 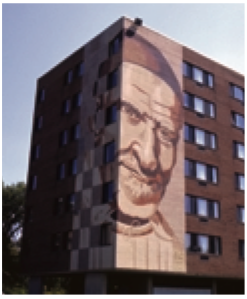 "We Are DePaul 2," A mural by Mark Elder, C.M. and students of DePaul University; mineral silicate paint on brick, Completed 2001.

This corner mural featuring St. Vincent is comprised of miniature faces of members of the DePaul University community. The faces of sixteen individuals make up the repeating pattern that becomes the portrait of St. Vincent. These individuals represent students, faculty and staff, and include a custodian, a former dean and a Vincentian priest. These faces are repeated and layered to produce the tones that become the greater image. The mural is the largest likeness of St. Vincent in the world, and celebrates the great diversity of the DePaul community.

The Making of an Icon from Nick Vassil on Vimeo. 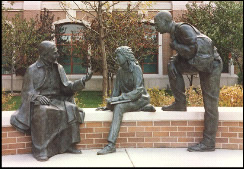 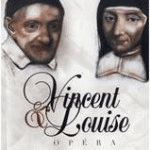 Festival of Religious Song in Kraków

On Vincent and Music

Vincent de Paul was a man noted for his many and varied talents and accomplishments, BUT nothing in his biographies suggest that included among them was a great passion for or involvement with the arts.

Yet, we do know that Vincent was man who believed in using all the tangible and intangible tools of his day to transform his world for the benefit of the poor, the sick, the dying, the homeless, and the marginalized.

So I ask: would Vincent use music as a tool for transformation?

If you have studied the life of Vincent you know that there is some scholarly debate about whether he was actually captured by pirates and sold into slavery. He tells of such events in one of his letters, but some scholars question whether those events really occurred or whether there were merely hyperbole – yet another example of Vincent using the one of the ordinary tools at his disposal – his writing – to transform. When describing part of his alleged period of involuntary servitude, Vincent tells a story of how he won his freedom by transforming the soul of the wife of one of the overlords of his captor. The overload had once been a Christian, but had abandoned the faith. As a result, his wife (believed to have been a Muslim) was always curious about Christianity. Vincent wrote that this woman would visit him in the fields where he toiled with the other Christian slaves. She would ask him to tell her about his faith. She always listed with the greatest of interest. One day, when the wife came to Vincent in the fields, Vincent looked around and thought of the Israelites’ captivity in Babylon. He intoned the psalm, “By the waters of Babylon,” followed by the Salve Regina and other songs of praise. The woman immediately went home to her husband and convinced him to assist in procuring Vincent’s release and safe passage back to Paris.