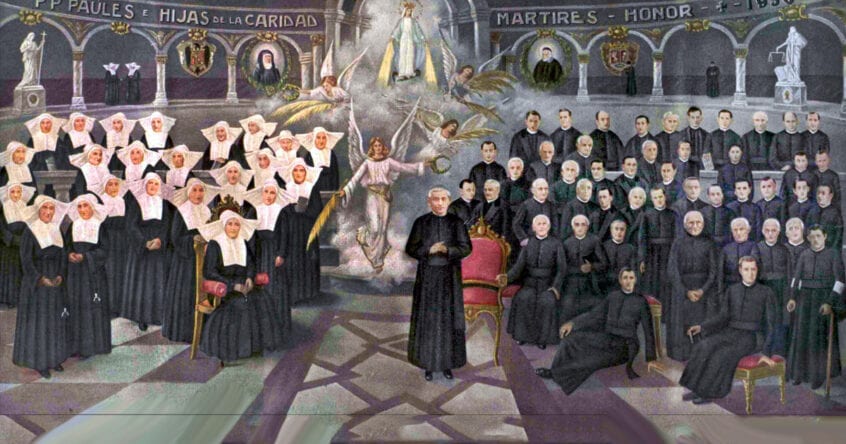 On November 6, the Church commemorates the Saints & Blesseds martyred in the anti-clerical violence that took place during the Spanish Civil War (1936-39).

A total of 54 from the Congregation of the Mission, 29 Daughters of Charity, 14 lay Vincentians (Association of the Miraculous Medal and Children of Mary (VMY)) and 5 diocesan priests who were their Vincentian spiritual advisors were killed “in odium fidei”, as a result of the hatred of the Catholic faith. Pope Francis beatified the first group of Vincentian martyrs on October 13, 2013 at Tarragona, Spain. A second group was beatified at a Mass in Madrid on November 11, 2017.

“…reflection leads us to consider the event as not simply one that occurred during the decade of the 1930’s but as an event that has meaning for our own era… Could it not be a motive to situate ourselves anew in the midst of an environment where we experience so much hatred and hostility? Perhaps this celebration is intended to remind us of the on-going struggle between good and evil and, thus, disturb our complacency… Throughout their lives, these men and women revealed themselves as authentic witnesses, people who made the gospel credible, people who gave new meaning to the Scriptures and to the Church. The years of persecution (1936-1939) were a chaotic and sad time in the history of Spain: the civil war involved a vicious struggle against God and the Church, a struggle to eliminate the Church from every part of Spain. Hatred led the persecutors to drag countless individuals into the abyss of captivity and the country was covered with the blood of the martyrs. Nevertheless, the blood of these witnesses of the faith became a sign of the failed attempt of the persecutors to eliminate the presence of Christ and his followers from our land… Many years were needed to heal the wounds of hatred that were inflicted on so many people. The martyrs, however, bring us back to reality and remind us of our hope for a future that is grounded on peace and harmony. Furthermore, we become ever more aware of the fact that the gift of forgiveness produces new and lasting reconciliation…”

One Comment on “Vincentian Martyrs of the Spanish Civil War: Meaning For Our Own Era”