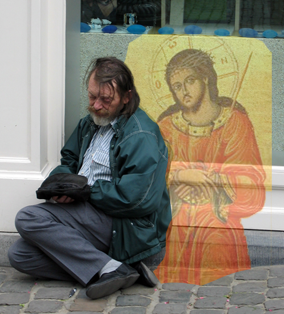 Seeing Poor and Marginalized Persons in a New Light

St. Vincent’s metaphor is of a beat-up, dented, scratched, scarred, and very common coin, which turns out to have another side. It is applied to the beat-up, dented, dime-a-dozen, mostly invisible ones– the poor people. “Why treat that common nobody on the ground as if he is somebody?” Here is Vincent’s answer: I shouldn’t judge poor peasants, men or women, by their surface appearance, nor by their apparent mental capacities. And this is hard to do, since very frequently they scarcely seem to have the semblance or the intelligence of reasonable beings, so gross and so offensive are they. But, turn the coin, and you will see by the light of faith that the Son of God, Whose will it was to be poor, is represented to us by just these people. (XI Conference #19, p.32)

The Poor, Our Treasure

As followers of Vincent de Paul, we are “People of the Scarred Coin.” We are God-touched individuals who have been awakened to the worth of everyone around us – especially the ones who most easily get pushed off the screen, the poor. We see their value– the treasure on the other side of that scarred coin– and respond to it with deep respect. We honor the preciousness of people and the face of God in them all.

Friends of the Poor

We see the poor as “our Lords and masters,” and we learn to become their servants. God also invites us to experience those who are poor as our friends. The poor help us to understand the relationship we should have with Jesus, in which our Lord and Master becomes our friend.

God Lives in His People

Two bedrock beliefs are the foundation for Vincentian Spirituality: first, God is the most real and the most precious reality there is, and second, this precious God lives in His people. This is what gives us reason to metaphorically “take our shoes off” when we come into the presence of those we serve. Anyone wanting the key to Vincent de Paul’s “great soul” could not get much closer than meditating on these two convictions – two beliefs which, for Vincent, were wrapped one inside the other. They are his answer to, “Why stop to help a crumpled old man who can’t help you back?”

The Icon of St. Vincent

From Around the Web

Seeing Christ in the Poor