Other pages in this category:

Encountering Christ in the Poor 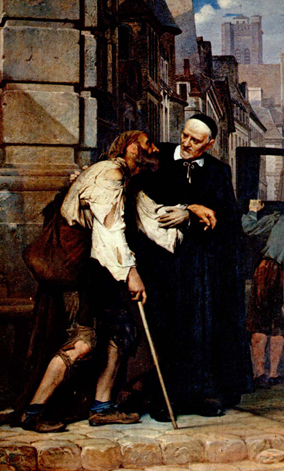 Seeing the Face of Christ in the Poor

St. Vincent teaches us to see Christ in the poor and suffering, so much so that the poor become our Lords and Masters and we their servants. Vincentian spirituality is centered around this concept. Jesus said “Whatever you did for one of these least brothers of mine, you did for me.” (see Matthew 25: 34-40). So we honor our Lord Jesus Christ by serving Him both materially and spiritually in the person of the poor. Vincentians believe that true religion is found among the poor, and that as we attend to their needs, they inspire us and evangelize us.

To Be Evangelized By the Poor

“The poor have much to teach you. You have much to learn from them.” –St. Vincent. When we share in the life and goals of poor persons, we discover the presence of the Spirit of the Lord who renews us. As we speak with them, listen to them, and accompany them as the agents of their own way to liberation, we allow ourselves to be evangelized by them– we are inspired and humbled by their faith and hope in God under the worst of circumstances.

To Evangelize the Poor

Vincentians seek, in their relationship with those in need, to bear witness to the love of Christ for each one of us. The mission to the spiritually needy and the materially needy are integrally related and cannot be separated; one without the other is worthless. Our proclamation of the good news will resound in people’s hearts especially when we give vibrant witness:

Trust In and Reliance On Divine Providence

St. Vincent had a deep faith and trust in God’s providential care for him and for all people, especially the poor.

St. Vincent and St. Louise established a new form of religious life- an un-cloistered, effective blending of the divine and the human, the supernatural and the practical, the contemplative and the active. Through their encounter with the Christ of gentleness and compassion in prayer, Vincentians are prepared to go out and assist the same Christ in poor persons. As Vincent said, “Give me persons of prayer and they will be capable of anything.”

The “Preferential Option for the Poor”

The Christian charity we are called to practice is not giving away to the poor the left-over, our spare time, our extra money, our old clothes, etc. Charity for us must mean giving our best and at times our everything. Our life must reflect the life of Jesus Christ who has called us to this great vocation of love. Our respect for the dignity of poor persons must lead us to treat them like guests at our family table and not as beggars at our gate, waiting for the crumbs.

The Poor Are Our Masters

We believe that the poor have some claim over our time. Much like a subordinate would be deferential to someone of higher authority, we show a deep respect, even devotion, for those who are poor. Our speech is simple. We deny ourselves of things and pleasures in order that we might be in solidarity with a poor person; so that they will not feel embarrassed by our presence. We go to them; not them coming to us always. We remain approachable and are kindly disposed when greeting them. We show patience, when persons may be demanding or even angry. We listen attentively to them, and consider first their needs. They must have a say in how they might redirect their lives.

Having encountered a poor person, or following an experience of service to the poor, we reflect together on that experience and its implications through prayer and Bible study. In this way we begin to learn how to cope with our own inner poverty. Vincentian spirituality maintains that this contemplation provides an experiential key that can help to unlock the true meaning of the Scriptures. This process of transformation prepares us to return to renewed service of our Lords, the poor.

From the beginning, the role of the laity was pivotal to our mission. The laity revealed the needs of the poor to Vincent at both Folleville and Chatillon-les-Dombes. One could say that the laity led Vincent to the poor. Today the Vincentian Family still shares a secular character. The charism comes from an association with the laity (SSVP, AMM, JMV, AIC, MISEVI).

St. Vincent de Paul was a 17th century French priest who had an untiring commitment to serving the poor. He started his first organization, the Ladies of Charity, an organization of rich women dedicated to assisting the poor, in 1617 when he experienced a personal conversion that led him to discover the pervasiveness of poverty in his day. He responded with bold initiatives to address these social problems. Vincent’s realization of spiritual poverty at Folleville set the stage for popular missions. Vincent’s discovery of material poverty at Chatillon-les-Dombes launched initiatives of organized charity that addressed both corporal and spiritual needs. His integration of evangelization and charity became the Vincentian charism.

St. Elizabeth was born into an upper-class family in New York City in 1774. She married at the age of 19. A devout Episcopalian, she was involved in charitable works such as nursing the sick and dying among her neighbors. In 1797 she was a charter member of the Society to Aid Poor Widows with Young Children; in 1803 she was herself left a widow with five children. She converted to Roman Catholicism in 1805, began the first free Catholic school staffed by religious women in the United States for needy girls in 1810, and went on to form the Sisters of Charity according to the tradition of Louise de Marillac and Vincent de Paul—the first U.S. apostolic society for women– in 1809. She is considered a pioneer of Catholic Education in the United States.

St. Louise de Marillac was a pioneer in religious life and in serving the poor. Throughout her life, Louise responded in faith to life’s tragic events. Though she was born into the upper class of Paris, she was born out of wedlock and never knew who her mother was. She was sent away to live in a convent at a young age. Her father died and she moved into a boarding house. She later married, but her happiness was short-lived: her husband became sick and died, leaving her a widow with a young son. During civil unrest, her two uncles who held high rank in the government were imprisoned. One was publicly executed and the other died in prison. One day while at prayer, Louise had a vision in which she saw herself serving the poor and living the vows of religion in community. Soon she would meet St. Vincent de Paul, who would become her collaborator in ministry. Together with him in 1633, she founded the Daughters of Charity, the first community of non-cloistered sisters, whose 25,000 members now serve around the globe.

Bl. Frédéric was the primary founder of the St. Vincent de Paul Society. His experiences of service to the poor, reflected on and informed by the Vincentian Spirituality that he and his friends followed, transformed Frédéric and led him to anticipate many of the elements of modern Catholic Social Teaching. A husband and father, Blessed Frédéric Ozanam offers an example of living with integrity and charity.

“Let us work with a new love in service of the poor, looking for the most destitute and abandoned among them. Let us recognize that before God they are our Lords and masters, and we are unworthy to render them our small services.”
–St. Vincent de Paul (SV XI, 393)

“I have no doubt that if any group of Vincentians, Daughters of Charity or members of the Vincent de Paul Society was asked to recount their most significant religious experiences, many of them would talk about occasions when they encountered the living Lord in and through their service of the poor.”
–Pat Collins, CM

“In serving the sick, you should have God alone in view. You should not be too lenient and condescending when the sick refuse to take remedies or become too insolent, yet you must beware of showing either resentment or contempt in your demeanor toward them. On the contrary, treat the sick with respect and humility, remembering that all harshness and disdain, as well as the services and the honor you render them, are directed to our Lord Himself.”
–St. Louise de Marillac (Leonard, Conferences 4, 273-81)

“Love of Christ and love of those who were poor energized Vincent and Louise. They were both, at the same time, mystics and realists.”
–Evelyne Franc, DC

“My God! What a wonderful title and what a beautiful description… Servants of the Poor! It is the same as saying Servants of Jesus Christ, for He regards as done to Himself what is done to them. What did he do on earth but serve the poor?”
–St. Vincent de Paul

“Action on behalf of justice, and participation in the transformation of the world, are integral elements in the preaching of the gospel.”
–Synod of Bishops, 1971, Justice in the World in MS LX III ( 1971) 924