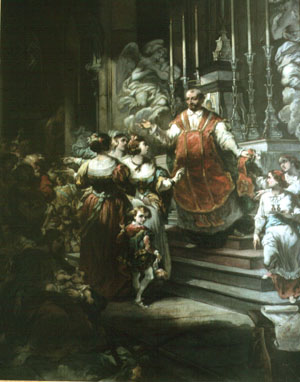 Ladies of Charity refers to an organization of Catholic lay women volunteers that was founded by St. Vincent de Paul.

St. Vincent de Paul was a parish priest at Chatillon-les-Dombes in 1617, when, on a special Feast Day, a woman parishioner told him of a local family in dire need of help. The entire family was ill and none could care for the others. Vincent spoke of the family’s needs during his sermon. As a result of this sermon an outpouring of charity was so spontaneous and abundant that the family was overwhelmed with food and visitors. Viewing the abundance of food and provisions, Vincent said, “This poor family will have too many provisions at one time and some will be spoiled and wasted. In a short time these persons will be reduced to their former state of need. Would it not be possible to induce these good women to give themselves to God to serve the poor permanently?”

A few days later, on August 23, Vincent called a meeting of the women of the area and suggested that they band together to carry out this good work. They agreed to form an association in which each would take her turn in serving the poor corporally and spiritually. Thus was the founding of the first of the Confraternities of Charity. The seeds that were planted at Chatillon-lesDombes germinated and flourished in other districts. To maintain the spirit of charity and unity among them, St. Vincent chose Louise de Marillac, his devoted cooperatrix to visit the Associations to see that they were properly organized and work was performed in the right spirit. On March 11,1934, Pope Pius Xl canonized Louise and proposed her as a model for the Ladies of Charity.