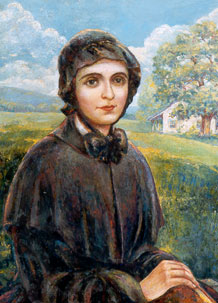 In 1809, Mother Elizabeth Ann Seton founded her community at Emmitsburg, Maryland. The nucleus of the little community was comprised of five Sisters who were soon joined by others. As the community took shape, Elizabeth directed its vision. Her desire to consecrate her life to works of charity led Mother Seton to adapt a Rule from that of the Daughters of Charity. In 1814 the community accepted its first mission outside Emmitsburg, an orphanage in Philadelphia. By 1817 sisters had been sent to staff a similar work in New York. At the time of St. Elizabeth’s death in 1821, the community numbered fifty Sisters.