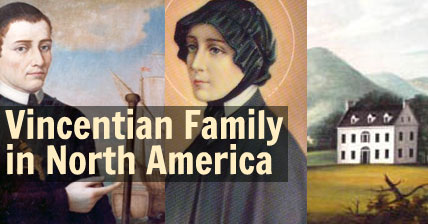 It’s very easy to get into the routine of daily ministry without stopping to take the time and look back at our roots, particularly the history of the Vincentian Family in the United States. Fr. Felix de Andreis CM and Fr. Joseph Rosati CM were the first priests from the Congregation of the Mission who arrived on American soil in 1816. By 1818 they had settled in Perryville, Misouri. St. Elizabeth Ann Seton founded the Sisters of Charity of St. Joseph at Emmitsburg, Maryland, on 31 July 1809. In 1850 the community at Emmitsburg affiliated with the Mother House of the Daughters of Charity in Paris and became the first American province of the Daughters of Charity. Other communities of Sisters of Charity either branched out from Emmitsburg, or were established independently elsewhere in the United States. Both the Society of St. Vincent de Paul (1845) and the Ladies of Charity (1857) began their United States foundations in St. Louis.

Check out or download the following presentations for more details: