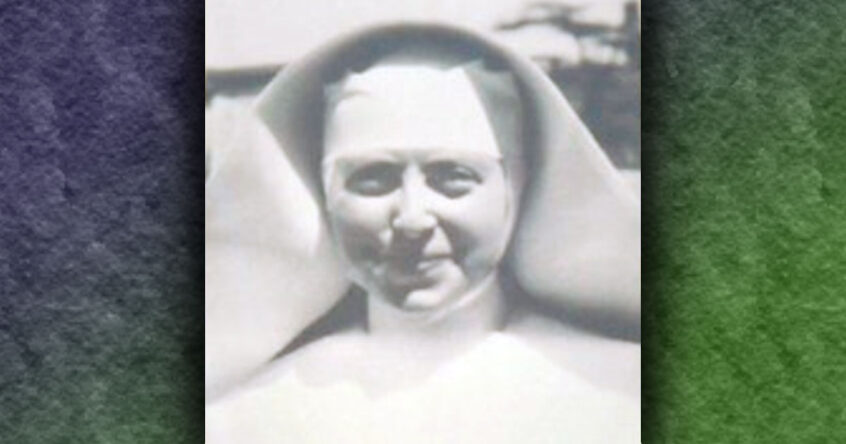 An English translation of this video is provided below.

Known as the angel or the mother of San Vittore, Sister Enrichetta Alfieri was a leading figure of the non-violent resistance in Nazi-occupied Milan, Italy. Sister Wandamaria Clerici tells her story:

Sister Enrichetta was a Sister of St. Joan Antida Thouret who lived almost her entire life in service in the Milanese prison of San Vittore. She came to the prison in 1923 and remained there until the time of her death in 1951. In a sense, she served a voluntary life sentence. The most significant years were when she was connected with the Italian resistance movement, of which Milan was an epicenter.

When the Germans arrived in Milan in September 1943, after arriving at the Regina Hotel (which was chosen as Nazi headquarters), they trained at the prison.* The prison was run like a concentration camp due to the Nazi ideology and the methods that were used to make people talk— through torture, mistreatment, and even killing. Sister Enrichetta emphasizes the barbarism in San Vittoro. Actually, at the time the Germans reached the prison, she was not there because in August 1943 some of the nuns along with the inmates were transferred to the Brescia prison following the bombings on Milan, and others were taken to Brivio. At the time, the Germans immediately realized that they were unable to manage the situation and especially the women’s section. And therefore they asked for the return of the sisters, to ensure greater order. The sister superiors are leery of sending the sisters back again into this type of situation. But Cardinal Schuster intervenes to ensure that this symbol of hope, in the form of the religious community, can help to alleviate the suffering of prisoners, especially women.

So in February 1944, the whole community of Sisters of Charity returns to the San Vittore prison, taking up their duties especially in the women’s section but also in the clinical ward, the infirmary, which was both male and female. Sister Enrichetta is the superior. She does not want to lower herself to the role of German warden, and she declares it immediately and makes her choices based on that, because I would say that Sister Enrichetta is righteous, Sister Enrichetta loves freedom, and above all she wants the dignity of the person to be respected: the person is at the center, so to speak.

She immediately aimed at forming a network of relationships with the strategic people inside the prison, that is: the doctors, the warden of the women’s section, the lawyers, the priests, The National Liberation Committee for Northern Italy, Il Patronato San Vincezo, the charity of the Cardinal, and Monsignor Bicchierai who is the intermediary between the cardinals and the German hierarchs.

Sister Enrichetta’s task is to bring important information from the messengers outside the prison to relatives, partisan relays, and at the same time to bring information and messages from family members into the prison. It means that Sister Enrichetta in these months becomes an actual relay of the partisans (occupation resistance fighters). The habit of that time, the religious costume that Sister Enrichetta wore, made it easier to carry messages in and out. We know that the Germans suspected her role, but they never had the courage to question her or get to the point of accusation. The suspicion, however, was very present.

Inside the prison, a French Corporal was considered the intimidator or tyrant and was in any case a person of extreme violence. He was always in the company of his dog, a wolf, who often played the role of a tormentor— the animal was hurled against people, against prisoners, in particular also against Jews. Sister Enrichetta is not afraid of this Corporal and therefore she stands up to him, and this is why the French Corporal hates her deeply and follows her very closely.

Sister Enrichetta, one day, September 22, 1944, receives a note from a prisoner in a very insistent way, to deliver to the outside. Sister Enrichetta knows that all these things are very dangerous and she doesn’t want to do it. This little note is written so badly that she rewrites it, and she gives it to the only warden available at that moment, Signora Gemma di Buccia, who takes it out of the prison. The warden takes it to the Uccelli family who were collaborating in the resistance network. She didn’t find the people who usually performed this function; one of the Uccelli relatives takes this message to Piazza Cadorna and the German police find them out. As a result Sister Enrichetta will soon be arrested.

On September 23 Sister Enrichetta is arrested on charges of espionage, cooperating with the enemy; and the penalty for her would be death by shooting. She is subjected to interrogation; luckily she is not searched because in addition to having all the compromising messages, Sister Enrichetta also had money on her that was used for a fund to benefit the prisoners. Sister Enrichetta is taken to the basement of the prison, which she had never seen. They called it the tomb. She had an opportunity to immediately release these messages— in some cases we know that inmates even ate these messages to avoid being found; they crumble and get rid of it. It is a very special situation because Sister Enrichetta knows she could be shot. She knows that Cardinal Schuster would do something for her as he usually always intervened in favor of priests and religious, or even certain public figures who were arrested. What she fears most is not so much death, because she knows she has played her role in favor of justice and freedom as an Italian. More than likely if she is not killed she will be transferred to concentration camps. This is something that bothers her a lot during her time in prison.

What is important to know that Sister Enrichetta, precisely because she maintains this dense network with the resistance and therefore is a partisan relay, will never regret having played this role that according to her was necessary to play. In this network of solidarity, she also involves other nuns although obviously with great prudence because everyone knows that they risk their lives.

Another function that she performed, as witnessed by Mike Buongiorno, by Indro Montanelli— these are the most prominent figures for proving what she had also done for other inmates— was that when people could move from the male to the female infirmary during the night, when Germans slowed down their surveillance, caused her to meet Mike Buongiorno, along with his mother who was also in prison, doctor Indro Montanelli with his wife… and this in my opinion highlights even more how she is truly dedicated to charity and the good of the inmates, to transform this place of detention to alleviate the interior suffering these people had. And so in little stolen moments, moments of freedom we could say, moments of brotherly love or marital love, are like giving these people a gift, so that they can find their freedom, their dignity, in a place of pain. Because she was not only a true Sister of Charity but an authentic Christian, an authentic woman and because of her works she came to be called the Mother of St. Victor, and the Angel of Goodness.

The fact that at her funeral, which took place at the Basilica of San Vittore, there were so many government authorities, so many common people, and a significant gathering of people, also shows how she was recognized because 28 years in a prison is a lifetime.

And another trait that characterizes Sister Enrichetta that can be seen very well in her photo is her smile because she brought light to the inside of that prison. It seems trivial but for people who are deprived of their freedom, and besides being in an actual prison cell, the ultimate form of deprivation is that they are tortured, mistreated, and insulted, to be able to meet a smiling face and a person who can be trusted was one thing very important. So much so that witnesses including Monsignor Barbareschi, Paolo Liggeri, Mike Bongiorno and also Indro Montanelli say that Sister Enrichetta could be trusted, because in any case the Germans, the fascists, introduced informers and therefore nobody could be trusted. Here she creates this network of trust, charity, support— and it is not only spiritual or moral because in any case her concern was to provide food for those who left the prison, clothes if they left for the concentration camps, a caress, a message, or to receive something that could be given to families. A truly important work.

*with the SS in control of one of the prison wings. According to Wikipedia “The prison gained notoriety during the war through the inhumane treatment of inmates by the SS guards and the torture carried out there” to make people talk. It also “served as a way station for Jews arrested in northern Italy”.