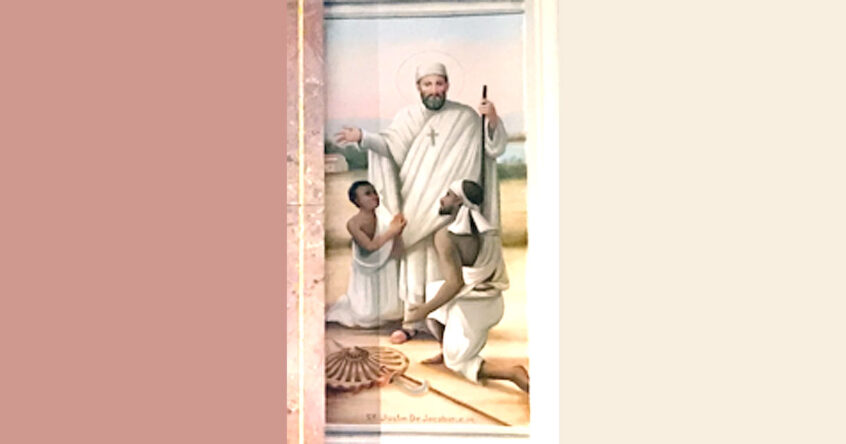 On the occasion of the Feast of St. Justin de Jacobis, we share this video from the Miraculous Medal Shrine Weekly Reflections series, script by Mr. George Whalen, video by Fr. Frank Sacks, C.M.

Watch and listen as Fr. Sacks speaks about St. Justin de Jacobis. The script of the video is provided below.

St. Justin de Jacobis on the Entrance to the Central Shrine

Greetings, Friends of Our Blessed Lady,

This week we turn our attention to the image of St. Justin de Jacobis on the entrance to our Central Shrine of the Miraculous Medal. He was an Italian Vincentian ahead of his time in his promotion of indigenous clergy in Eritrea and Ethiopia. He represents all of Mary’s sons of St. Vincent who have labored in foreign missions.
A thorough review of the historical setting and missionary activities of St. Justin appeared in a 2000 article in Vincentiana.[1] His pioneering efforts to unite Catholics in two regions of Eritrea and Ethiopia met with some success during his ministry. He was noted for his concern to address peoples’ needs. He set in motion the formation of native clergy in Ethiopia and Eritrea.

Justin was born in San Fele, a village south of Naples, on October 9, 1800. He joined the Vincentian Congregation of the Mission eighteen years later. Ordained on June 12, 1824, he served in various capacities by preaching retreats and missions and serving as a local Superior in his Congregation. He became Director of seminarians in Naples in 1836, where he was remembered for emphasizing personal prayer.

King Ferdinand II heard of Justin’s reputation as a preacher of missions and retreats, and a man of great personal holiness, so he recommended him for a bishopric. Justin heard rumors that this was likely, and he was sufficiently realistic to know that it could happen; three Vincentians had already been made bishops in the Kingdom of the Two Sicilies. He decided to take steps to prevent himself from becoming the fourth. His practical sense of reality, however, led him to admit that he would be prepared to become a bishop in some missionary territory where there was a real need for a bishop.

From his earliest years as a Vincentian Justin longed to serve in the foreign missions. His desire was realized in 1836. That year the Sacred Congregation for the Propagation of the Faith commissioned him to establish the Ethiopian Mission where he labored in Ethiopia and Eritrea. He respected the people whom he served, most of whom were members of the Coptic Orthodox Church. He had very cordial relationships with the local Coptic clergy which earned him high praise in many quarters, although some of the Orthodox bishops adamantly opposed his development of Roman Catholicism in their territories.

One of Justin’s great hopes was that some of the Ethiopian clergy would become Catholics. The first one to do this was a deacon. Then gradually others followed his example, as well as a young man who wanted to be prepared for the Catholic priesthood. Justin insisted that all converted clergy, as well as those studying for the Catholic priesthood, remain in the Ethiopian Coptic Rite; they were not to be Latinized. Justin was alone in this way of thinking; except for one young confrere, Carlo Delmonte, none of his other Vincentian missionaries agreed with him. Thus, Justin had anticipated by more than a century what Vatican II and Paul VI’s Evangelii Nuntiandi would say about missiology.

Justin had great devotion to Mary. During his first year in Adwa, Justin gave out Miraculous Medals to everyone he met, telling them how Mary was the Mother of God and the Mother of all who believed in Christ. He engaged in much charitable ministry in the name of Mary. His listeners not only noted what Justin told them about Mary; they also observed how he honored her and prayed to her. Because of this, they called him Abba Yakob Zemariam, which means Mary’s Jacob.[2]

An Italian Capuchin, Bishop Guglielmo Massaia, recommended to Rome that Justin be ordained a bishop. Against his personal wishes Justin finally relented; he was ordained a bishop in secret in Massawa on the 9th of January 1849 and returned to his own area.

For the remaining eleven years until his death in 1860 Justin’s life was a series of problems, harassment, persecution, and even a spell of imprisonment, all originating from the opposition of the Orthodox Coptic Bishop. He was beatified on June 25, 1939 and canonized on October 26, 1975.

In our image, Justin appears clad in the garment of the indigenous people of southern Africa. Instead of an ornate, golden crozier, he holds a simple wooden staff that symbolizes his responsibility for the believers under his care. The pectoral cross around his neck is a simple one. The two natives kneeling next to him perhaps symbolize the conflicting areas under his jurisdiction in Eritrea and Ethiopia. The older man to the viewers right seems to be a warrior who has put aside his shield and spear; the other man, perhaps a young candidate for seminary, perhaps represents so many native vocations inspired by St. Justin. His right hand is extended in a gesture of blessing and teaching.

With good reason Saint Justin de Jacobis was chosen to adorn the archway to our Central Shrine. Not only did “Mary’s Jacob” promote devotion to Our Lady of the Miraculous Medal, he also embodied the best of the Vincentian missionary spirit. His confreres today can look to him as their model of Vincentian zeal to spread the Gospel to all nations and as an inspiration to respect indigenous cultures where they labor and establish seminaries for the formation of indigenous clergy.

Our prayer this week is taken from the Collect from the Mass remembering this great Vincentian missioner. We pray:

Lord God,
you gave to your saint, Bishop Justin,
the grace to become all things to all men
in order to preach the good news to the Ethiopians.
May his intercession help us to take part in
the preaching of the Gospel and to bring all nations
to the unity of one faith by our brotherly service.
We ask this through our Lord, Jesus Christ, your Son,
who lives and reigns with you and the Holy Spirit,
one God for ever and ever.
Amen!

Next week we will reflect upon the small rose window above the entrance to the Central Shrine.

Thank you, dear friends, for your patronage and especially for your devotion to Mary. May you always remain close to Our Blessed Lady.

O Mary, conceived without sin, pray for us who have recourse to you.

[1] St Justin de Jacobis: Founder of the New Catholic Generation and Formator of its Native Clergy in the Catholic Church of Eritrea and Ethiopia” (Vincentiana, 44, n.6, November-December, 2000). A copy appears here at cmglobal.org. See also the FamVin entry at the Vincentian Encyclopedia.

[2] On Justin and Mary see the article by Rev. Robert Maloney, C.M. at VinFormation.