BRANCH OF THE VINCENTIAN FAMILY INVOLVED IN THE PROJECT: Daughters of Charity, CM 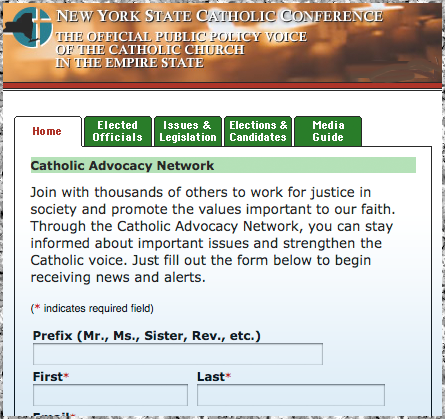 Example of Advocacy using the internet

LENGTH OF TIME THE PROJECT/PROGRAM HAS BEEN IN EXISTENCE: 15+

The goals of this program are:

1. Educate/organize the people on a grassroots level on the following:

2. Engage the youth in advocacy work

To achieve the goal of youth participation in the NYS Catholic Conference Public Policy Day, a minimum of 30 students from two catholic high schools and religious education programs attend the day in Albany each year. They visit the legislators and assist in presenting the issues identified by the Bishops and the New York Catholic Conference as priority issues for advocacy efforts. They participate in educational sessions on Advocacy and systemic change.

Catholic Charities is the agency responsible for recruiting members for this statewide advocacy network. This network was set up by the New York State Bishops to organize the Catholic voice in the work of systemic change on the state level. Currently, over 1,000 Catholics from the Diocese of Ogdensburg participate in the Network. This is an e-mail system. The Catholic Conference notifies members of advocacy needed on a particular legislative item. Members then simply click on the Take Action and send icons and their legislator is contacted. It is an efficient and effective way to work for systemic change.

The pastoral letter titled: Restoring the Covenant: Society’s Responsibility for the Poor and the Vulnerable, issued by the New York Bishops in 2005 was used as a teaching tool for grassroots advocacy. This concept of the broken covenant was adopted by Catholic Charities USA and has been transformed into a national movement. Nationally, it is known as the Campaign to Reduce Poverty in America.

Both the Daughters of Charity (Northeast Province) and Eastern Province of the Congregation of the Mission provided the funding for printing and postage costs for the distribution of 3,500 copies of the Restoring the Covenant document throughout the diocese of Ogdensburg and have supported the work of advocacy with grants for the past 15 years in the Diocese.