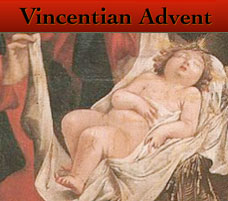 The theme of self-emptying has given rise to a whole school of Christian thought, one that influenced St. Vincent profoundly. You remember his advice to Antoine Durand, the newly appointed superior of the seminary at Agde: “It is essential therefore for you, Father, to empty yourself in order to put on Jesus Christ” (SV XI, 343). Influenced by St. Paul’s words, Vincent placed self-denial among the five virtues of the Company; he called us to empty ourselves in order that the Lord might fill us. But Paul’s meaning is actually even more profound. He is saying that Jesus freely made himself powerless from birth, taking on the human condition that inevitably ends in death, even the dreaded form of death meted out to slaves in the Roman world, the cross.

Surely St. John Gabriel Perboyre identified with [this] message dramatically. So too do all those who give their lives wholeheartedly to the poor, standing with them in their powerlessness. The infancy narratives teach us this same truth in a more picturesque way. Jesus is born among the poor of Israel. There is no room for him in an inn, so his first dwelling place is a manger. Humble shepherds are the first to come and worship him (Lk 2:7-16).

They came to worship the newborn king. Are we capable of that ourselves? Are we willing to bow down before the Lord and pay him homage? Are we able to make Christ the absolute center of our lives, the revelation of God in the flesh? Or do we clutch alien gods as Herod did? These are manifold: power, popularity, security, comfort, only to name a few. Most such gods are reflections of our inner selves. They mirror forth our own desire to be the center of the universe. Unlike Herod, the Magi bowed down before the Lord and worshipped him. They joined Mary and Joseph, the angels, the shepherds, and the stars in proclaiming Christ as the center. I encourage you to bow down before the Lord this Christmas as all of us did when we vowed to give our whole lives to following him as the evangelizer of the poor. I urge you too to bow down before him in the person of the poor, who are– in a phrase we use so often that it can easily lose its meaning– “our Lords and Masters.”

There is a remarkable tension in John’s Christology. On the one hand, it soars off to transcendent heights. Jesus, as the Word, is with the Father before the created world came into existence; he and the Father are one. On the other hand, the Word became flesh and made his dwelling place among us. John will not tolerate the slightest doubt about Jesus’ full humanity. He consistently combats a tendency that would plague Christianity throughout the centuries: because we believe that Jesus is more than fully human, we will be tempted to think of him as less than fully human. No, says John, when we contact the person of Jesus, we really meet God in the flesh. Jesus is one of us.

Notice one thing especially about John’s theological perspective. Just as our own lives are a created gift, so also God’s enfleshment in Jesus is a gift of gratuitous love. Advent symbolizes God’s free, self-giving embrace of humanity– nothing can separate us from him.

St. Vincent loved this mystery of the incarnation. He turned to it again and again as the theological source sustaining our vows and our community virtues. He believed deeply that Jesus was God’s ultimate word, his revelation, his offer of himself to us in the flesh. This faith in the enfleshment of God also lies at the heart of Vincent’s ministry to the poor. He believed that Jesus in a different, but still intimate, way identified himself with the person of the poor. Knowing the daily, difficult, at times discouraging service we engage in, where appearances may sometimes fool us, Vincent encourages us: “Turn the medal and you will see by the light of faith that the Son of God, whose will it was to be poor, is represented to you by these….” (SV XI, 32). Do we have a fully incarnational faith? Do we see God in Jesus’ flesh? Are we convinced of his intimate union with the poor?

Vincent believed at the same time that, to serve the poor well, we too must be “clothed with Christ” (Rom 13:14), thinking his thoughts, loving with his heart, seeing with his eyes. A great Advent challenge is that the Lord might be more fully enfleshed in us.