Now, read this excerpt from

“It is certain that, after the experience of Folleville, Vincent de Paul was a changed man. Exactly how changed we do not know. What we do know is that suddenly, in July 1617, he abandoned the easy life of the château to become the parish priest in a little town in southeastern France, near Lyons, which, according to one historian, “was losing its soul.” There, on 21 August, the second transforming event of 1617 took place. The story is well known. Vincent himself recounts it. There was a family in the parish in great misery because they were all poor and sick and had no one to care for them. This time, however, Madame de Gondi was not there to challenge Vincent. This time he had to act on his own. He had, however, matured and grown spiritually since Folleville. He was capable of acting independently and quickly. Three days later, 24 August, the first Confraternity of Charity, composed entirely of women, was established in Châtillon. Like Folleville, Châtillon was a sign of the direct intervention of God in Vincent’s life. Just as he will always refer to Folleville and Madame de Gondi when speaking of the founding of the Congregation of the Mission, so he will refer to Châtillon when recalling the origin of the Confraternities of Charity and of the Daughters of Charity. For the first time, at Châtillon, Vincent was faced by a social problem – material poverty. At Folleville, he had become aware of the full extent of the spiritual abandonment of the poor who were forsaken by the Church and especially by the clergy. At Châtillon, he is confronted by society’s abandonment of the poor. His immediate response is to preach and he obtains the desired result. The women of the parish rush to the aid of the family. He tells us, “I spoke … so strongly that all the ladies were greatly moved. More than fifty of them went from the city and acted like all the rest.” Abelly, the first biographer of Vincent, tells us of Vincent’s reflections that evening on the experience. He says, “Here is an example of great charity but it is not well organized. The sick poor will have too many provisions all at once, some of which will spoil and be lost and then, afterwards, they will fall back again into their original misery.” That very evening, the notoriously slow acting Vincent had laid the foundation for the confraternity. He says, “I proposed to all those good ladies, who had been animated by charity to visit these people, to group together to make soup, each on her own day, and not only for them but for all those who might come afterwards.” 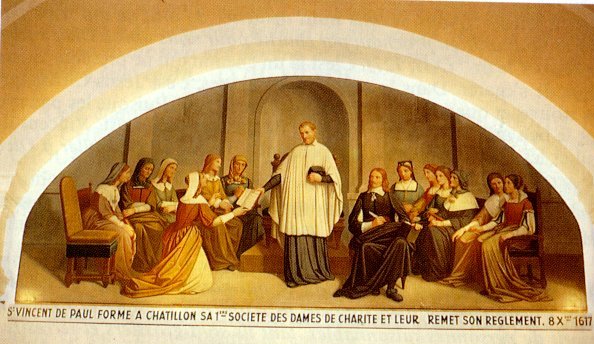