Pope Francis beatified 522 martyrs of the Spanish Civil War (1936-39) on October 13, 2013 at Tarragona, Spain. Among these are 27 Daughters of Charity and one of their lay collaborators.

Thousands were murdered in the Spanish Civil War just because they were Catholic.

Large numbers of Catholics were butchered during the 1936-1939 Spanish Civil War, solely for being Catholic. Unlike other examples of martyrdom in most parts of the world, the situation in Spain was unique– in fact, probably no country in the 20th century witnessed so much bloodshed among its clergy. Wikipedia reports that “entire religious communities were persecuted, leading to a death toll of 13 bishops, 4,172 diocesan priests and seminarists, 2,364 monks and friars and 283 nuns, for a total of 6,832 clerical victims, as part of what is referred to as Spain’s Red Terror.”

Official Logo for the Beatification 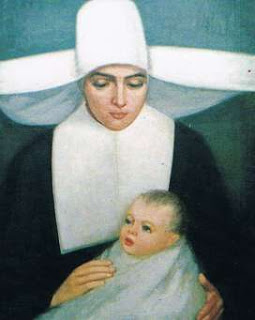 Sor Josefa Martínez Pérez, one of the martyrs

Image source and more information (in Spanish) at: http://martires.hijascaridad.org

5 Comments on “Beatification of Daughters of Charity of the Spanish Civil War: October 13, 2013”