Who Wants To Be a Vincentian? St. Vincent as Priest

Start Quiz
Cardinal de Berulle assigned Vincent to this parish just outside the city of Paris. Where was his first parish assignment as resident pastor?
After a short tenure in Clichy, Vincent was transferred to Folleville (near Amiens) where he would:
Vincent heard a confession of a highly respected elderly man from Gannes. The man was convinced that he would not go to heaven if he did not receive absolution. This event greatly inspired Vincent to preach a famous sermon, later credited as the foundation of the Congregation of the Mission. When was this?
Vincent would send his missionaries from the Congregation of the Mission to this foreign mission, and the Vincentians are still in this country today. What country was it?
It was while Vincent was in Chatillon-les-Dombes that he discovered the importance of organizing charity in order to be more effective in serving the poor. What was the group of laity that he founded together with some aristocratic women?
Convinced of the need for able priests in serving the people, Vincent and his confreres founded seminaries. This is still a principle work of the Congregation of the Mission. Vincent also conducted recollections at St. Lazare. What were these recollections called?
Vincent and Louise de Marillac were co-founders of the Daughters of Charity. How did the establishment of the Daughters set a precedent in the Catholic Church?
This particular group of prisoners' life-span was almost always cut short because of deplorable conditions. Vincent would be named chaplain to the ships powered by these persons. Who were they?
Due to the rampant poverty caused by protracted civil wars throughout France, parents found it increasingly difficult to care for their own children. Infants were frequently left at the doors of the church. What were these infants called?
In the film "Monsieur Vincent" one of the first Vincentians in the Congregation of the Mission told Vincent that there was no more food for distribution to the thousands of refugees who sought help at St. Lazare. What did Vincent say to Monsieur Portail?
/
Check Answers
Your Result:
Review Answers
Sorry, no results found.
Please repeat the quiz and try different answer combinations.
Thanks for taking the quiz! For more media resources about St. Vincent de Paul, click here.
Recommended for you: 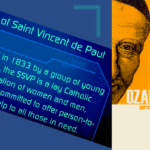 3 Comments on “St. Vincent As Priest”