What was the name of the community motherhouse that St. Vincent established in 1632 in Paris?
St. Vincent worked to relieve the physical misery and give hope to the:
In 1633, St. Vincent and St. Louise founded this group to help the Ladies of Charity in their service of the sick and poor:
Who sent St. Louise on her first mission, to the village of Montmirail?
The Daughters of Charity healthcare ministry is said to have begun at the hospital of:
Vincent braved all dangers, wrote letters to the Court, even wrote a letter to the Pope in hopes of accomplishing this:
This group of noble, pious women helped St. Vincent by donating money and aiding the sick poor in Paris:
All his charitable works had made Vincent de Paul __________ in Paris and at the Court.
Vincent and his helpers fed the hungry in the French provinces devastated by the Thirty Years War. Vincent's role in the soup kitchens consisted of:
The education ministry of the Daughters of Charity goes back as far as:
/
Check Answers
Your Result:
Review Answers
Sorry, no results found.
Please repeat the quiz and try different answer combinations.
Thanks for taking the quiz! For more media resources about St. Vincent de Paul, click here.
Recommended for you: 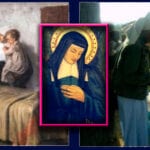 5 Comments on “Vincent and Louise Quiz”