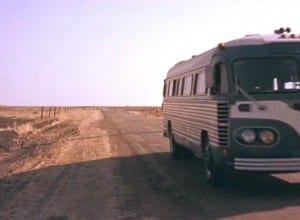 During this novena, we are reflecting on (among other things) those who are pushed to the edge of our societies.

Forty years ago this summer, I became one of those on the edge. I was 16 years old, and I ran away from home. There was no particular reason. I was I suppose full of teen-age 1960s angst and tired of red dirt southwest Oklahoma. Nothing was cool there. Everything was boring. I had seen a movie about runaways and it seemed exciting, maybe even glamorous. Better than Frederick, that was for sure. I wanted to go to California, but I only had enough money for a bus ticket to Denver. So over a few hours, I went from middle class respectability in small town Oklahoma, surrounded by a dense network of family and friends, to being a lonely and friendless runaway on the streets of a city much larger than Frederick.

As it turned out, being homeless in Denver wasn’t glamorous, it wasn’t exciting, it was terrifying and dangerous. Things happened to me that 40 years later, despite my well known ability to carry on and on and on about a multitude of subjects, I can’t write about and indeed have only spoken about with a small handful of people over the years. I was hungry, and didn’t know what to do. I couldn’t find a job. I didn’t know where the soup kitchens were. After a couple of days, I started to look a bit scruffy, and people were averting their eyes or telling me to get lost.

Someone said “go over there”, so I knocked on the door of the Catholic Cathedral on Colfax and the office lady gave me $2, which in 1969 was more than it is now. Big Macs were 35 cents. Bus fare was a quarter. I was really really grateful for that two dollars. I was also glad that she spoke kindly to me and didn’t just tell me to go away. After I left the office, I hid behind some bushes and cried.

The loneliness of homelessness can get really intense. I had no street skills, and no one to talk to. I had never been in a situation where I went all day and no one said anything to me and I said nothing to anyone else. After the events of the first couple of days, I was afraid to talk to people, to be seen. Then, as now, for the homeless, all too often “to be seen” is to be hurt, attacked, run off, jailed. So you practice invisibility until you get good at it.

When I lived in Kansas City, Missouri, I was a volunteer with the Uplift organization, which helped homeless people that didn’t live in shelters. They had two old bread trucks and one suburban and three routes. The trucks were loaded with everything a homeless person needs (except a home). It was really amazing to see where homeless people lived in KCMO. Right close to a big elegant mall was a homeless camp hidden under an overpass, complete with camouflaged panels that looked like the side of the embankment. There was another camp which was really out of the way. It was close to a river, on an abandoned railroad, we had to drive over a tiny one-way bridge to get to it. There were a bunch of abandoned railroad cars that homeless people lived in. It lacked most amenities, but it had the most spectacular view of downtown KCMO at night. I was amazed that no one had put expensive condos on the site, the views were so incredible. Most of the railroad cars were covered with graffiti, and it was art. We were always there at night, and there was a very surrealistic feel to the experience.

Homeless people in Oklahoma City are no different, they too are clever in their ways of hiding. I am not going to talk about places they may be hiding, since I don’t want to cause anyone any trouble. But there’s a dumpster where a homeless person was crushed. A parking garage where a homeless teenager jumped and killed himself years ago. A place where a man named Steve died. I remember a freezing cold night when Marcus and Philip Evans went down and tried to get him to go to a motel, but he wouldn’t go, he just burrowed more into the cardboard and newspapers and sleeping bags that were his home. From his viewpoint, it was better to be free on the street than to be locked into whatever terror an enclosed space would bring him.

Jesus often told people to “open your eyes so you can see, get some ears so you can hear”. Then as now, it is easier to not see distressing sights than to open our eyes and really see what is before us. All of it — everything that is there, not just the view that the Chamber of Commerce or the Republicrats want us to see.

Mother Teresa’s comment about the distressing disguises that Jesus wears has been repeated so often it has almost become a cliche, but even so it is a very true and prescient observation from someone who had practiced very hard the art of open eyes. What we try to do in a novena like this, which just goes on and on and on and on and repeats so many things over and over and over and over, is to break through the scales which cover our eyes so that we can see the reality in which we live — not forgetting that the vision we seek includes a supernatural reality as well as the temporal reality.

“What do you want? Lord, I want to see.” So Jesus spits in the mud and rubs it on his eyes and tells the beggar to go wash in the pool of Siloam. The first extraordinary thing, from the cultural viewpoint of the time, is that Jesus was willing to not only see the blind beggar, but also to speak with him. The beggar was obviously a grave sinner, why else would he be so afflicted? Note the similiarity of views today with then. People don’t want to see or acknowledge the homeless because there is obviously something wrong with them. If they weren’t (fill in the blank) lazy, degenerate, alcoholic, drug addicted, whatever, they wouldn’t be homeless, right? At least, that is what we tell ourselves over and over and over so we don’t have to deal with the consequences of our sight.

When I went to Rome in 2004, someone told me, “Bob, you have to decide what you are going to do about the beggars, because they are everywhere.” I quickly found out the truth of that advice. They were everywhere. I knew all the socially responsible lies to tell myself starting with “These people are professional beggars, ignore them” and ending with “if you get too close to them they will attack you”. I ended up deciding to just give a small coin to everybody. The old ladies sitting in front of churches would clutch my hand and softly murmur Italian words I didn’t understand. For all I know they were saying “You hard hearted American, why don’t you give me a Euro?” But I couldn’t afford to give everyone a Euro so I gave them what I had and when I saw them again, I would give to them again. It’s a much better practice than running through some kind of decision-making process to determine who was worthy to receive a gift and thus dismissing some as unworthy. Who am I to decide anyone’s worthiness? “Lord, I am not worthy, but only say the word and I shall be healed.”

So my advice is to take the risk of opening your eyes and seeing the homeless among us and to just forget everything the Chamber of Commerce wants you to believe about the homeless and go ahead and give them something. It doesn’t have to be money. You could make little paper lunch bags of goodies for the homeless — pack it with a candy bar, some hard candy, a peanut butter cracker package, some aspirin or ibuprofen, a clean pair of socks, and a small bottle of lotion and maybe a prayer card or a personal note — “I am praying for you”. Don’t forget the hand or skin lotion — it is really important for people who aren’t able to shower regularly. In the winter, carry extra hats and gloves with you and give them away.

Be not afraid, as Jesus would say, to open your eyes and see what is to be seen in your own town. I am sure that when we think of “having a vision of Jesus” we aren’t thinking of looking for homeless people, we’d like something more sanitized and holy, like a beautiful figure in an immaculate robe, radiating comfort while floating in front of us as rose petals shower down all around us. But most of us will just have to be satisfied with the more prosaic vision of “Jesus in the breadline”.

Lord, I want to see. Heal my blindness so that I can see.