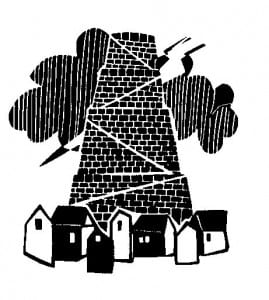 “Come, let us mold bricks and harden them with fire. They used bricks for stone, and bitumen for mortar. Then they said, ‘Come, let us build ourselves a city and a tower with its top in the sky, and so make a name for ourselves; otherwise we shall be scattered all over the earth.’ The Lord came to see the city and the tower that the men had built. Then the Lord said: ‘If now, while they are one people, all speaking the same language, they have started to do this, nothing will stop them from doing whatever they presume to do. Let us then go down and there confuse their language, so that one will not understand what another says.’ Thus the Lord scattered them from there all over the earth, and they stopped building the city. That is why it was called Babel, because there the Lord confused the speech of all the world. It was from that place that he scattered them all over the earth.” -Genesis 11:3-9

This was a project with a quest for power and fame. There is an unmistakable arrogance in wanting to make a name for themselves. Think about your own vocation as a Vincentian. Sometimes when we are so many and with different aspirations, the end result is confusion.