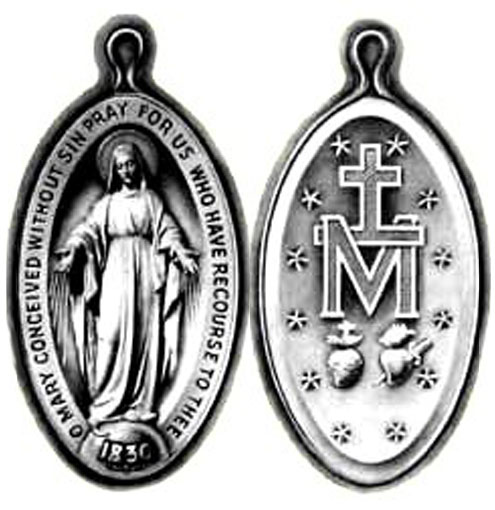 Front side of the medal

Mary is standing upon a globe, as the Queen of Heaven and Earth. Her foot crushes the head of a serpent, to show that Satan and all his followers are helpless before her (Genesis 3:15). Satan was defeated by Mary’s obedience to God. The rays coming from her hands symbolize the graces Mary gives to those who ask her. The year, 1830, is the year the Blessed Mother gave the design of the Miraculous Medal to Saint Catherine Labouré. The “O Mary conceived without sin” supports the dogma of the Immaculate Conception of Mary, referring to Mary’s sinlessness, that was officially proclaimed 24 years later in 1854. The Bible states that Mary is “full of grace” and “blessed among women” (Luke 1:28)

Back side of the medal

Twelve stars encircle a large “M” from which arise a cross. Below are two hearts with flames arising from them. One heart is encircled in thorns and the other is pierced by a sword. The twelve stars can refer to the Apostles, who represent the entire Church as it surrounds Mary. They also recall the vision of Saint John, writer of the Book of Revelation (12:1), in which “a great sign appeared in heaven, a woman clothed with the sun, and the moon under her feet, and on her head a crown of 12 stars.” The cross symbolizes Christ and our redemption, with the bar under the cross a sign of the earth. The “M” stands for Mary, and the interleaving of her initial and the cross shows Mary’s close involvement with Jesus, her involvement in our world, her role as mother of the Church, and her part in our salvation. The two hearts are the Most Sacred Heart of Jesus and the Sorrowful Heart of Mary. They represent the love of Jesus and Mary for us. (See also Luke 2:35).