How St. Louise Opens the Door of Faith for Us

How St. Louise Opens the Door of Faith for Us
The Year of Faith and the Life of St. Louise
The Church and St. Louise
Quotes
Related Links
Resources 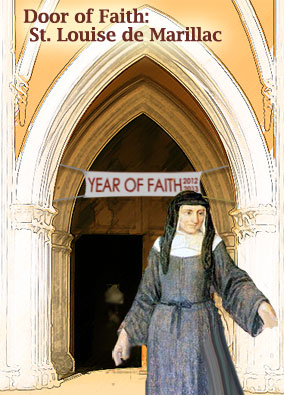 The Power of St. Louise’s Example for Today

The Church, the mother of believers, continues to be mother and teacher to us as members of the Vincentian Family. A challenge we have before us is to form ourselves as catechists, and to form other catechists. This is a challenge that St. Louise confronted courageously and creatively.

Each of us can deepen our faith, and in turn strengthen the faith of other believers, especially the faith of children and young men and women. In St. Louise’s time there was much religious ignorance. The ecclesial understanding of the faithful of seventeenth century France was, in general, weak. It is true that people lived in a society that was religious (different from our own society which is secular), but many people were ignorant about the truths of religion. St. Louise attained and lived an ecclesial understanding that was rare at that time.

In our time, religious ignorance is even more noteworthy and obvious. The moral relativism that we see everywhere affects the faith and the lifestyle of many believers. Let us imitate St. Louise, who believed and experienced that she had received the gift of faith through the Church, and nourished that faith in others.

The Year of Faith and the Life of St. Louise

We know that Louise was with the Dominican Sisters until she was thirteen, and those years profoundly influenced her life as a Christian. St. Dominic attempted to form his followers with a profound ecclesial understanding based on the faith, the sacraments, and the sound doctrine contained in the catechism of the church. He taught them to confront heretics not by preaching conversion to them, but by putting aside their words and presenting themselves as simple and poor individuals, thus renouncing every form of pomp. This was the Dominican legacy that Louise lived at the monastery in Poissy and that she accepted during her education.

Strong Knowledge and Understanding of the Faith

When Louise met Vincent, she already had a regulated prayer life, was versed in sacred scripture, had read a number of important spiritual writers, such as Granada, Gerson, de Sales, and Berulle, and had received spiritual guidance from Michel de Marillac, Jean-Pierre Camus, and possibly Francis de Sales. In a word, she was not a beginner.

St. Louise’s ecclesial understanding was not limited to the personal level. When she visited the Confraternities of Charity she took on the role of catechist, teacher and formator of teachers for the parish schools. She formed women’s groups and instructed them in the faith and the interior life, accompanying them and guiding them, counseling and orienting them in their practice of charity with the poor. She created groups of laywomen catechists who gave witness to the Church as the mother of believers. She directed retreats and gave constant witness to her faith in her teachings and in her visits to the communities, in her meetings with the Ladies of Charity, in her conferences and correspondence. She told the Daughters of Charity that they were to be daughters of the Church in two different ways: first, as Christians and then, as Daughters of Charity. She was convinced that the company was a new entity in the life of the Church, an entity that was united with the Church’s charitable mission. The Holy Spirit had raised up this society of apostolic life in the Church in order that its members might reveal God’s love for the poor and thus highlight the charity of the Church, our mother.

A Model for Achieving Balance in Spiritual Life

A struggle to maintain virtues painfully acquired by rigorous asceticism and numerous devotions marked the early stage of Louise’s spiritual development. Factors such as delicate health, an anxious spirit constantly troubled by the dramatic, often traumatic, events in her life, a thirst for the absolute which lacked a clear orientation– all these contributed to preventing Louise from finding, early in life, the necessary balance between her considerable human talents and her personal mode of sanctification. Louise imposed a rigid structure upon her life in general and on her prayer in particular. It would seem that Louise was trying to turn her little apartment into the cloister into which she had been refused admittance years earlier. Such a woman, scrupulously bound to a regular schedule, was certainly not ready to set out to visit the Confraternities of Charity or to dedicate herself to the formation of servants of the poor. Thus it was that St. Vincent undertook to try to bring balance into her spiritual life. Louise de Marillac’s character was not suited to the cloister. It was too prone to close in on itself. She needed to reach out and to find her God in others. And so Vincent would write to her to urge moderation, peace, calm, and abandonment to God’s providence.

The Church and St. Louise

Respectful, Obedient; Yet Not Afraid to Defend the Truth When Necessary

St. Louise lived with the conviction that the Church was inseparable from the Holy Spirit. Encouraged by this fact, she was a woman of the Church and wanted every Daughter of Charity and every member of the Confraternities of Charity to live as daughters of the Church. Therefore she asked them to adhere to and obey the magisterium of the Church and to respect the pastors and bishops. She herself lived this way. Nonetheless, when some pastor or bishop interfered in the mission, suggesting or demanding things that were not in accord with the gospel and its imperative to serve the poor, she courageously expressed her objections and disagreement. We see this in her relationship with the pastor in Chars, a follower of Jansenism.

Respect for the Pope

Louise’s unconditional adherence to the Church, the hierarchical body of Christ, is revealed and expressed in her respect and veneration of the Pope, the representative of Christ and the head of the Church. This attitude was also expressed in a letter that she wrote to M. Antoine Portail when he was in Rome: You are at the source of the holy Church and near its head, the Holy Father of all Christians. I have so often wished to be there in order to receive, as a child– though an unworthy one– his holy blessing (SWLM:202 [L.179]). She had hoped that before her death the Company of the Daughters of Charity would receive Pontifical approval. This, however, would not come about until eight years after her death.

We always find Mary in St. Louise’s writings as the Mother of God, intimately united to her son in the accomplishment of the divine plan. Louise’s reflections on the role of Mary in the redemption caused her to see, well before any definition of the dogma, the importance of the Immaculate Conception. She wrote, “Most Holy Virgin [I wish] to glorify God for the choice He made of you to be the Mother of His Son. Because of this divine action, your conception was immaculate since the Father applied to you the anticipated merits of the death of Jesus Christ.”

“At Holy Communion, on that day, I was moved to make an act of faith … Throughout my trip, I seemed to be acting without any contribution on my part; and I was greatly consoled by the thought that God wished that, despite my unworthiness, I should help my neighbor to know Him.” –Spiritual Writings of Louise de Marillac, Letter A50, p. 704

“I gave myself to God to accept the designs of His Providence if He willed me to continue, for the remainder of Lent, in a state of interior abandonment and even affliction so as to honor the sufferings of Jesus Christ which the Church places before our eyes.” –Spiritual Writings of Louise de Marillac, Letter A21, p. 701

“I must have great trust in God and believe that His grace will be sufficient to enable me to fulfill His holy will, however difficult it may appear to be, provided the Holy Spirit is truly calling me. I shall know this by listening to the advice which He will permit me to receive.” –Spiritual Writings of Louise de Marillac, Letter A5, p. 716