How St. Vincent Opens the Door of Faith for Us 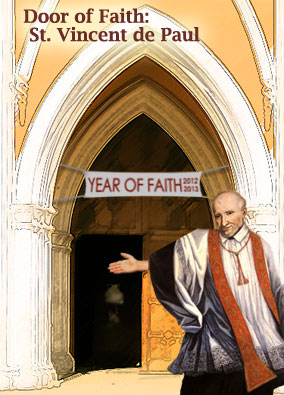 The Power of the Vincentian Message for Evangelization Today

The Saints who left a profound impression on humankind and the Church did so because they discovered a new dimension to Christianity, a new way of living the message of Jesus, a new way of reading the Gospel. Even when times change, that way will continue to be valid. St. Vincent did not see holiness as some direct path that led to God, but rather as a path that moved in one direction, then another direction and still another… from one poor person to another poor person until one encountered God. Today, especially in the Western world, many people fit into the category of “spiritual but not religious”, even disenfranchised. But they come to volunteer, they come to us because they want to serve the poor– that’s their entry point. Social ministry is the part of the faith life that makes sense to them. Service is a meeting point.

The Year of Faith and the Life of St. Vincent

St. Vincent Taught the Faith, to All and Especially to the Poor

St. Vincent saw a multitude of poor peasants and laborers “who are condemned for not knowing the necessary truths of salvation and for lack of confession.” He decided to make the evangelization of the poor the focal point of his priesthood. He began to organize popular missions (almost 1,000 missions at the house of Saint-Lazare) and soon realized that the priests themselves did not know enough about the faith to offer spiritual assistance either (for example, some did not know the words of absolution, etc.). So Vincent established seminaries and organized retreats for ordinands. St. Vincent was also an influential promoter of the lay apostolate for the rich and educated: he founded the Ladies of Charity, and between 1635 and 1660 some 20,000 individuals made their retreat at Saint-Lazare (counts, nobles, lawyers, councilors, marquises, presidents, members of Parliament, soldiers, judges, merchants, pages, and footmen).

St. Vincent Had a Crisis of Faith

During these times, St. Vincent suffered terribly. Something like the dark night of the soul described by St. John of the Cross overcame him. He could not recite the Creed. He wrote down the Creed and sewed it on the lining of his cassock. He told himself that every time he put his hands over it, he wanted to reaffirm his faith. At the same time, he devoted himself to acts that were contrary to the urging of the temptation: living the faith in intense acts of charity through daily visits to the sick in the hospital. And this way of living brought him to the greatest discovery of his life: the decision to devote his whole life to the service of the poor, out of love for Our Lord Jesus Christ. Scarcely had he made up his mind to do this when the suggestions of the evil one vanished. Thus this individual who had up to that time been a priest with no great ideals became a saint. Oh happy dark night! When Vincent told others about his crisis of faith and how he overcame it, he did this to bring them to use similar remedies and to obtain relief in the trials they were undergoing.

St. Vincent wrote, “A Turk or idolater can care for the body [but] you should assist the sick poor spiritually.”

He Connected Faith to Action

According to St. Vincent, “There is nothing more in keeping with the Gospel than, on the one hand, to gather up light and strength for the soul in prayer, spiritual reading, and solitude, and then to go forth and dispense this spiritual good to men. This is how we should act; that is how we should by our deeds bear witness to God, that we love Him.”

He Believed in the Midst of a Hostile Environment

During his two years of captivity in Tunis, Vincent was surrounded by people who were convinced that Christianity was harmful. This is not that different from our own situation where we find ourselves surrounded by indifference. Vincent not only persevered in his faith, but helped his master, who had made a decision to embrace Islam, return to the Christian faith.

The Church and St. Vincent

St. Vincent brought religious women out of the walls and grills of the convent and sent them out to the vast field of the real life of men and women, to serve in authentic communion with them in their sufferings and needs. This new style of community was destined for a splendid future in the Church.

St. Vincent always needed to assure himself that his faith was the faith of the Church. One day he explained to the Missionaries that “all my life I have been afraid of finding myself at the start of some heresy […] enveloped in the errors of some new doctrine before realizing it.” Thus we can understand Vincent’s opposition to Jansenism, a heresy at the time. As a member of the Council of Conscience, he struggled resolutely against this doctrine. He played an important role in Pope Innocent’s condemnation of the five propositions of Jansenism.

Vincent believed that holiness, union with God, could only be achieved through love. God is Love, and the human person is able to love with the divine love that has been poured out into our hearts through the Holy Spirit (Romans 5:5). This reality led Vincent to the affirmation that the important aspect of holiness was not simply doing the will of God, but rather doing the will of God out of love for God. Human holiness for St. Vincent is an encounter of human love with divine love in the person of the poor.

To the Consecrated Individual or Believer, Who May Be Weak in Faith

The epidemic of unbelief that we are experiencing today can infect believers as well. Volunteers, donors, ask yourself: Do I keep my generous commitments but do so without daring to speak about God? Do we visit the poor in their homes, but forget that prayer before, during and after the encounter is essential to mutual spiritual growth, and to the evangelization of those visited? Do we speak of solidarity and justice, without any reference to God? In order to confront our tendency toward internal secularization, we can recall the words that St. Vincent addressed to the Missionaries: “the interior life is essential; it has to be our aim; if we lack that, we lack everything.”

“So then, if there are any among us who think that they are in the Congregation of the Mission to preach the Gospel to the poor but not to comfort them, to supply their spiritual but not their temporal wants, I reply that we ought to assist them and have them assisted in every way, by ourselves and by others, if we wish to hear those consoling words of the Sovereign Judge of the living and the dead: ‘Come, beloved of my Father, possess the Kingdom that has been prepared for you; because I was hungry and you gave me to eat; I was naked and you clothed me; sick and you visited me.’ To do this is to preach the Gospel by words and by works, it is to do so most perfectly and it is also what Our Lord did and what those who represent Him on earth, in office and in character, such as priests, should do.”
–St. Vincent de Paul (Conferences to the CM’s, Conference 195, p. 608.)

“…there are many who, if they have a recollected exterior, and an interior filled with lofty feelings about God, rest there, but when it comes to deeds, and there is need of action, they stop short. They flatter themselves by the warmth of their imagination; they rest content with the sweet discourses that they have with God in prayer; they even speak to Him as though they were angels. But apart from this, should there be question of working for God, of suffering, of self-denial, of instructing the poor, of accepting illness or disgrace, alas! They are no longer to be found; their courage fails them… let us not deceive ourselves: Totum opus nostrum in operatione consistit. (All that we have to do is work.)”
–St. Vincent de Paul (Conferences to the CM’s, Conference 22, pp. 49-50.)

“Saint Thomas puts forward this question, namely, who has the greater merit, the one who loves God and neglects the neighbor, or the one who loves the neighbor for the love of God? He himself gives the solution to this dilemma, concluding that it is more meritorious to love the neighbor for the love of God than to love God without reference to the neighbor… because the perfection of the Law consists in loving God and the neighbor. Give me a man who loves God alone, a soul elevated in contemplation, who never thinks about his brothers; that man, finding it very agreeable to love in this way… stops at savoring this infinite source of sweetness. And then you have another who loves the neighbor, no matter how rough and crude he may be, but loves him for the love of God. Which of these loves, I ask you, is the purest and least self-interested? Doubtless it is the second, and in this way it fulfills the Law most perfectly.”
–St. Vincent de Paul (CCD:XII:214)